-->
Home Avalon Dungeon r18 Chapter 33 [Maid] Tie a Rampaging Maid
Alexis covered Fatima's eyes with a towel and tied it tightly.
「Y-you're going to blindfold me again...?」
Fatima screamed in anxiety as Alexis carried her in his arms.
Fatima is almost as tall as Alexis, and has a glamorous figure with voluminous breasts and hips and a thin waist, but when she is lifted up like this, her light weight makes Alexis feels that she is still a woman.
While thinking so, Alexis took her to the bed and made her lie on her back.
Fatima seemed to recognize the bed from the creaking sound and the soft touch of her back.
And she says in a low voice. 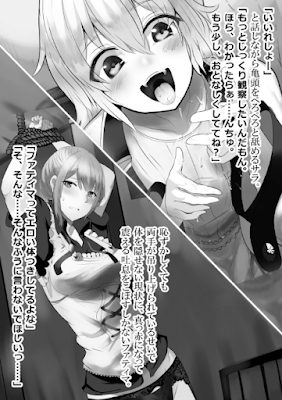