-->
Home Avalon Dungeon r18 Chapter 92 [Mage] Teaching Pleasure to a Mage who Tries to be Clerical
Alexis was fidgety.
He had said that it could wait until after the training, but he couldn't help thinking about Fransisca whenever he had free time. His brother would be here tomorrow, after all.
（Ah... Damn. In such a case, I should just clear my head...）
To clear my head, it's important to take out a shot.
He was thinking so, but he didn't feel like waiting in his room quietly, so he was strolling around the fort aimlessly.
Should he have taken her with him right away? No, but isn't that a bit too devilish? But still, she's late...
As he was walking with this thought in mind, he came across an unusual pair of people just as he was approaching the bathhouse area.
It was Maria and Valencia. They seemed to be after taking a bath, and they seemed to be talking something in a friendly manner.
**a
（I thought she was slow on the street...）
Alexis wanted to let out a sigh, but there was one thing that bothered him before that. It was Maria's attitude. He had noticed it before, but he still couldn't see that attitude without Alexis.
（...Sure enough. It's called phobia of men.）
Alexis thought so, but he would have to talk to Valencia for now. Besides, he needed to give her a sermon.
With that in mind, Alexis walked toward them.
"Hey," Alexis said, and Valencia turned around in a huff, while Maria's expression suddenly hardened and she became silent.
（I'm wondering why Maria is in a place like this with all men... But... No, I remember she said that she didn't volunteer. But anyway, let's go to Valencia first.）
So Alexis talks to Valencia.
「What are you doing? I said you can keep on working out, but I didn't say you could stay on the road, did I?」
「I-I'm sorry, Alexis-sama!」
Valencia straightened her posture with a panicked look. She immediately blushes and continues, "Then".
「I'll be right there. The place is Alexis-sama's room, right?」
「Y-Yes. Have you cleaned yourself up?」
「Yes.」
「Then let's go.」
「Y-Yes!」
Valencia nodded her head, pursed her lips, gave Maria a quick greeting, and ran toward Alexis. That's when it happened.
「Um...」
Maria opens her mouth.
Did she hear what Valencia said to her during the conversation, or had she heard it from Valencia before that? She seems to have had a lot on her mind and turns her reproachful gaze toward Alexis with a somewhat tense look on her face.
「I-I don't think... it's good to be like that.」
Maria's voice sounds as if she is about to disappear, but she says what she wants to say. Alexis is amused by her attitude, which seems to be only frightened, but has a hint of strength in it.
「V-Valencia-chan said she's not used to that kind of thing, so... That's why...」
In the middle of the conversation, Maria turned her head down, and after that, she stopped making eye contact with Alexis.
Valencia shook her head in confusion, as if she was aware that she had conveyed something that could be misunderstood.
「Um, Maria-san. I'm fine, so you don't have to worry about me. I told you that I'm a Sagrado, so I have no choice but to obey Alexis-sama...」
Was that what they were talking about? Alexis wants to let out a sigh.
Then Maria might take it as a sign that he is forcing Valencia to do what she says.
「Oh, um...」
Maria finally looks up again.
But she looks a worried look in her eyes as she speaks, "And...".
「Valencia is still young. That's why...」
Maria puts her hand on her chest and finally looks Alexis in the eye.
「...Could you like to use me instead?」
She tells Alexis.
* * *
**b
This is getting weird, Alexis thinks.
Later, Alexis returns to his room with Maria, not Valencia, for some reason.
Alexis and Valencia, both of them had refused that it was necessary, but as usual the misunderstanding had not been cleared up.
As for Alexis, it was true that he did not care about anyone. So, he thought it would be better to accept her proposal than to continue to make the relationship with Maria worse by being stubborn.
Besides, her frightened attitude toward Alexis might be eased a little.
After confirming that Maria had entered, Alexis firmly closed the door to his room and went to his chair to sit down.
He puts one knee on the seat, half cross-legged, and starts to open his mouth, "Well, then...—".
It would be too much to ask her to take off her clothes from the beginning, since she seems to be timid. Then, would it be better to let her get used to the body touch first?
Just when he was thinking about this and that.
Maria suddenly puts her hand on the loose-fitting robe she is wearing. Then, she undoes the corset-like belt around her waist, and then she slips the robe off her shoulders.
Alexis opens his eyes in surprise, and Maria drops the belt and the robe at her feet. She was wearing only her underwear underneath, and her negligee was pushed up, exposing her breasts, which were much bigger than they looked through her clothes.
The transparent crimson negligee and the crimson thong that opened in the front shined against her white bare skin. And, there is a black butterfly "tattoo" on her right side. 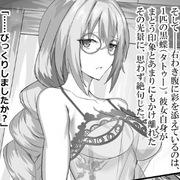