-->
Home Avalon Dungeon Chapter 3
Alexis regretted it.
He had planned to go to the bathhouse when it was no longer crowded, and now here he was.
However, it was almost bedtime now, and he did not want to bother his seniors by going to ask them now.
（Is new recruits always in trouble?）
He thought so, but he could not stay at a loss forever.
Now, there were two doors in front of Alexis.
So, in conclusion, (...I don't know which is the men's bath and which is the women's bath...!).
That was the problem Alexis was running into.
And for now, he decides to open the door on a hunch.
Maybe if it was a women's bath, there must be a fragrant woman's smell... like a fine perfume, sweet, sexy, and pungent. That's how he imagines it.
**a
And now, as he slammed open the door, a muffled humidity covered his skin.
In front of him is a changing room. There are shelves, a towel rack, a chair, and a mirror.
It was unoccupied, but at any rate, it did not give him the sweet image he had imagined. In fact, it smelled like a bath. The smell of bath salts and shampoo.
（I see... I don't know...）
Alexis thought so, but decided to take off his clothes, thinking it would be fine. After all, there is no scent of sexiness here.
He takes off his armor in the room, then removes his tunic, trousers, and belt, and puts them into a shelf in a messy way.
After removing all the clothes, he wrapped a towel around his waist just in case.
Then he walks toward the door leading to the public bath.
――And just then, the door opens with a click.
It seems that someone has already come before him. Fortunately, he had wrapped a towel around his waist. Lucky. Alexis thinks.
But the person who opened the door――
「――Hey. Fatima, are you in yet?」
Her eyes, defenseless, amethyst-colored, bright and pretty, are fixed intently on Alexis.
She must have stretched out when opened the door because her slightly bent over bosom creates a dazzling cleavage of white skin, and a drop of water drips down into the gutter of the cleavage.
Her bosoms are fuller than expected, and the baby-pink tips are modestly pointed.
Her waist, which is so thin that it is doubtful it can hold iron armor, curves down to her plump buttocks, and leads to her supple, soft thighs.
Between her tightly closed thighs, a modest, almost lush hair, the same color of platinum blonde as her hair, bloomed.... 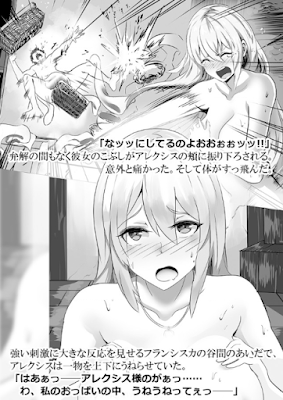 「Kyaaaaaaaaaaaaaaaaaaa!!」
Immediately, Alexis was snapped out of his reverie by the scream of a woman herself.
「Wh-What are y-you doing in hereeee!!?」
Smack!!
Before he can argue with her, her fist is slammed down on Alexis' cheek.
It was surprisingly painful. And then his body is blown away.
With a dull thud, his back hit a chair.
And at the same time, a strange sound of "Goha!" escapes from his mouth, and what flutters up in the air is a sheet of pure white. It was a white towel that was supposed to cover his thing.
（Oh, no! I'm done）
Alexis sees Fransisca's teary-eyed face with bright red cheeks.
「You are the worst!? Disgusting, awful!」
Fransisca was shouting.
「Pervert!? Scum!? Filthy!? Get out?! Get out now!!」
She kicked his leg and it hurts him a lot.
But she is kind enough to avoid kicking his thing...but not so much. It must be so bad that she hesitates to even step on his feet.
「Sorry? I'm sorry!!」
Alexis had to apologize anyway.
He immediately picked up his clothes that he had shoved into the shelf and left the place running, completely naked.
Immediately, he ran to the door of the men's bath right next to the door.
Alexis was relieved to see that the door was also unoccupied.
「T-There was a witness to my monster...」
He looks down at his own dong.
There is a single tentacle hanging down sadly. But then, when he thinks back to her naked body that he had just seen... immediately, it starts to twitch and lengthen like a turtle's head that literally grows out of its shell.
No man in the world has ever seen such a white and fresh skin.
（What a waste. What a loss for mankind!）
Alexis was about to reach for his dong when he stopped.
「Wait, what am I doing? I'm not trying to be a solo master!」
Besides, there are more urgent matters to deal with right now!
Yes, Fransisca has witnessed Alexis' abnormal shape.
**b
* * *
Meanwhile, at this time, Fransisca was sitting in the changing room, still clutching her shaking shoulders.
「I'll never forgive you... Alex Rein... only him, never, I swear it!? I'll never forgive him...!!」
Fransisca's eyes were almost tearful, but at the same time they were burning with anger.
* * *
The next morning, Alexis was summoned to the command center as soon as possible.
Of course, he had a bad feeling about this, but he decided to follow the instructions.
This might be the last day to wear the new iron armor. He thought this to himself.
As expected, Fransisca was waiting for him in the command center, looking as if she was crawling in the depths of a bad mood.
When she said "Alex Rein", her voice had an aura of anger in it.
「I don't care what kind of a rascal you Krangals are, this is the first time in my life that someone like you has invaded a bathhouse with such impunity」
Surprisingly, Fransisca's manner of speaking was unaffected.
「You've had enough of your licking glances at my body, and y-y-you not satisfied...!」
Fransisca's voice immediately shook.
「Also, y-y-you did that to me...? Exposing your man's thing...!? You should be ashamed of yourself!!」
Fransisca's face was bright red up to her ears, as if she remembered yesterday. She was also teary-eyed. It seemed that she couldn't keep her normal mind.
「Um, about that...」
Alexis spoke awkwardly.
「I'm sorry. But, please don't tell anyone...」
If possible, he doesn't want her to tell anyone about his monster.
「What!?」
Fransisca exclaimed.
「H-How could I tell anyone?? T-T-That embarrassing thing...」
「I see. Well, that's good」
Fransisca seemed to be annoyed by Alexis' attitude.
「...I see, I understand」
She suddenly cuts in with a quiet voice.
「Yes?」
Alexis asked back, and Fransisca told him.
「I have just decided. I've just decided which placement I'm going to give you」
Ah, it's about Avalon. Alexis guessed.
And Francis said this to Alexis.
**c
「A guardian of my team was just killed the other day. So, I'm assigning you to fill in」
「What...?」
Alexis couldn't believe his ears.
「Guardian...? but I want to be an attacker. Isn't that what the king wrote in his letter?」
A guardian is the most dangerous position, standing in front of his allies with a large shield, protecting his surroundings and acting as a decoy for monster.
「Besides, I've never used a shield before」
Alexis pleaded desperately, but Fransisca would not listen.
「Well, that's just great. You'll have a chance to touch the big shield」
Then she smiles.
It is good that the smile is pretty, but it is not.
「No, no, I don't have a big shield...」
Alexis said that but Fransisca told him, "Don't worry about it and――".
「If it's a big shield, we still have the one that belonged to the Guardian who died before us」
And seeing the boiling anger in Fransisca's smile, Alexis was convinced.
――This princess is going to kill him!.
「...Okay, I will do it」
Soon Alexis was answering. This was a desperate move.
「I'll do it. I'll play the role of guardian. But...」
「Yes, I know what you mean. I'll keep quiet about what happened」
Hearing Fransisca's answer, Alexis nodded.
< Prev - ToC -  Next >
Edited Kanaa-senpai
Please give a rating on the novelupdates -> here
Thanks for reading...