-->
Home Avalon Dungeon Chapter 115
Jerome quickly lowered himself and closed the gap between him and Fransisca.
「It's hard to play against a woman... but don't take it personally!」
Swoosh! Jerome's foot swipe is about to knock Fransisca's shin off her feet.
But, with a leap, Fransisca drew her sword with a slick motion.
She swings away with a single flick of her translucent, pale tip. Then, a wind rises up, almost blowing the small room away.
Along with the sound of the wind, Jerome's body also gets blown away.
He should have been hit hard against the wall, but he curled up, kicked the wall with his feet, and landed on the ground.
Fransisca, on the other hand, also puts her feet on the floor, swings the tip of her sword diagonally downward, and readjusts her stance to a half-body posture.
Her feet are aligned, and only the tip of the sword she has lowered points toward Jerome.
The mild amethyst gaze now turns sharply toward Jerome.
"—Heeh," Jerome smiles.
**a
「I see. You surely are a good fighter... good enough to conquer the Avalon and to subdue our Vice Knight Commander...!」
Jerome fell to his knees and slammed his fists on the floor.
「...I hear you're not an opponent to be trifled with! But...oh, it's a shame. If I had a sword in my hand now, I would never be as far behind as you are...!」
「I am honored by your compliments.」
Fransisca smiled.
「But...」
Jerome continued.
「I'm not beaten yet, either!」
Jerome swung his fist upward from the ground.
The next moment, at Fransisca's feet, there is a sizzling sound and an impact is created on the floor.
Fransisca staggered back with her foot caught in it while her eyes blinked.
「Jerome-sama! You—」
「You're the one who was distracted!」
Jerome kicked the ground from his low position and leaped toward Fransisca again.
Then, taking hold of her slender hips, he pushes her down with all his weight.
Fransisca's shoulders hit the floor with a thud. However, she escaped the blow by lifting the back of her head.
「...—」
Fransisca stops breathing.
Seeing her arms tightly grasped, Jerome exhaled and a smile appeared on his lips.
「Just because I don't carry a weapon doesn't mean you should be careless, right?」
「...I didn't expect you. I didn't know you could do magic.」
Fransisca stared into Jerome's green eyes at close range.
「Alexis-sama can't use it. And neither will the other guardians and attackers. I thought that's what Krangal's people thought.」
"Of course," Jerome smiled.
「Certainly the Krangal are like that. Except for mages, they basically never learn magic. But I am different. I have a talent for fighting, but I am not proud of it. However, I want to be as strong as possible. That is why—」
「I see. I admire your ambition. But I'm not going to let you through here.」
「What do you think you can do now?」
「...my purpose has not yet been defeated」
**b
When Fransisca answered clearly, Jerome looked puzzled and then laughed.
「...Haha. You're right, indeed. I'm definitely stuck in this room.」
Jerome's grip on Fransisca's arm tightened.
「But what can you do now? Since you are lying on the ground like this, don't you think you are a rat in the bag? For example—Well, now I can do what I want with you. Like this.」 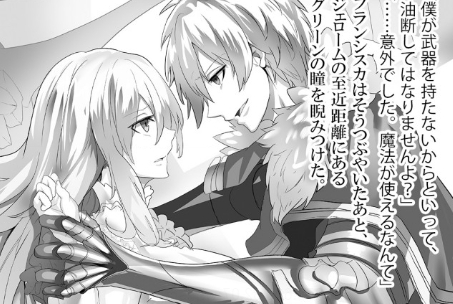