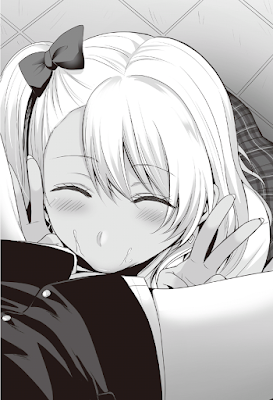 And when she pulled it out.
「Ughhhh.......」
A sharp stimulus that almost shattered my back attacked my penis.
It was a horrible deep throat.
And once she took my penis out of her mouth. She spoke.
「Ah, I managed to get it all in... Fu~min's Ochinpo-chan is so big, it was a little bit painful, though...」
She giggled and began to lick up my cock, which was glistening with saliva, carefully from the base with her tongue.
「Nnnn, well then....」
She suck on my cock again and started to move her face back and forth violently.
「Npo, Nju, Jupo, Jupo, Jubo」
Her cheeks were puffed up from the intense suction, and she has a very lewd face from sucking on the cock.
「Ju, Jyupu, Jyupu, Jyupu, Gupo, Gupo, Gupo」
Her mouth and lips were gobbled up like she was devouring it.
Apparently, this intensity was meant to be a finishing touch.
The way she leaks obscene juices from her mouth and bites down on the meat stick is like a hungry beast.
「Whoa, ugh!? Oi, oi, wait, wait a minute」
「Nmu.....」
As I approach my limit and panic, she firmly wraps her hands around my waist and begins to swallow my penis deep into her throat again.
「Nchu, Nnnn, Nmuu, Slurppppppp!?」
The intense sucking and the stimulation of it made my eyes go blank, as if they had exploded.
「Ugh!!」
There was no way I could bear this. I felt my lower abdomen tremble violently, and then the meat stick twitched and shuddered at the sensation.
At that moment, Fujiwara-san quickly removed my cock from her mouth.
She then opened her mouth wide and move her palm under her face and started to catch the sprinkling of semen with her entire face.
Spurtt, *Twitch Twitch* Spurtttt!
A large amount of semen stained her face as she closed her eyes and opened her mouth wide.
The semen that dripped down her cheeks and lips fell onto her palm, creating a white puddle of semen.
Spurt....!
And when the last drop hits her cheek, she smiles seductively, looks up at me, and begins to drink the semen that has accumulated on her palm in one gulp.
「Gulp, gulp, gulp......」
She swallowed hard, wagging her throat as she swallowed the slimy semen. Finally, she smiled, showing her white teeth while her face was covered in semen.
_________________
< Prev - ToC - Next >
Stay safe and healthy....
Edited by Kanaa-senpai
Please rate this series throught this -> link
Follow the group on ko-fi for latest update -> link
You can donate me through this -> link
Thanks for reading...