-->
Home Avalon Dungeon r18 Chapter 17 [Princess-maiden] Bathing Together (Foreplay) - Part 2
Seeing Fransisca's hot exhale, Alexis is sure.
「...you, don't tell me you want to be banged by me?」
He pulls her arm and checks Fransisca's expression.
「Uh...uh. T-that's...」
Fransisca's gaze drifts up and down.
She doesn't come clean, but Alexis smiles at her.
「Ah, I see. So, it's not a big deal...」
He decided to start with that.
「Of course. You don't like this, do you?」
He moves his tentacles and pokes Fransisca's breast.
Fransisca turns her eyes to Alexis's penis, which was twitching, and says, "Eh, you know...".
「I-I don't... dislike... it that much...」
That is Fransisca's real feeling.
Since his tentacles have brought her pleasure on several occasions, she can no longer see it only with disgust.
「But you always hate it, don't you?」
「T-that's...」
Fransisca exhales, but Alexis says meanly, "Eh, is it not?".
「Uh...」
Fransisca could not answer. Her shame prevented her from answering.
Knowing how she was feeling, Alexis says, "I knew it".
「Then maybe it's time to refrain from forcibly doing it you. I mean, I'm a prince after all. Royalty has an aesthetic of being a gentleman」
「Eh...?」
Fransisca instantly looks like she is about to cry.
There are many things one could say, such as that she doesn't care a bit about the aesthetics of royalty, or that there is no prince in the world as un-prince-like as Alexis, but Fransisca is clueless about them.
「Well, if you keep saying "no", I don't think I'll consider doing it」
Alexis pulls back the tentacles poking Fransisca's breast, and she lets out a lustful moan.
He then moves his tentacle penis from side to side, and her gaze follows his penis perfectly, but she is probably unaware of this.
「So, you don't like it?」
Alexis asked smilingly.
「Ah, uh, uhh」
Fransisca turns red and looks like she is about to cry.
「I-I don't... hate it...」
"What?" Alexis asks back.
「I-I-I don't hate it!」
With tears welling up in the corners of her eyes, Fransisca finally confessed.
「P-please... d-don't be so mean to me...」
Fransisca was panting and rubbing her breath and wriggling her hips, which made Alexis want to burst out laughing.
「Heh, since when did Fransisca become such a lascivious girl? Even though she is a Princess-maiden and she is still a virgin」
「Uuu. A-Alexis-sama!」
Fransisca lets out a protest.
But then, Alexis thrust his tentacles penis into her mouth, thinking that he might have teased her a little too much.
「Then, lick it」
「Eh――?」
Fransisca gasped at the unexpected suggestion, to which Alexis replied. 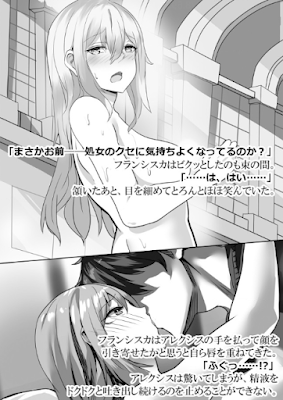 「You want to be banged, don't you? Then you're going to have to get me in the mood」
Alexis still saying mean things and he thought.
（I don't have a choice to do this because she looks like the kind of person someone want to torment. And I'm the one who wanted to torment her. Really, we're a good match）
Thus, Alexis was exonerated.
「Come on, lick it. Carefully and lovingly」
Alexis pressed his tentacle penis firmly against Fransisca's lips.
「Oh, ugh...」
Fransisca swallowed her spit and extended out her tongue gently.
When she licked the glans, there was a jerking movement.
（...Ah!）
Then Fransisca extended her tongue and flicked it along the neck of the penis, then tilted her head and flicked it along the underside of the penis. Like a dog.
「Mmm, mmm...」
Fransisca's heart is pounding, and at the same time, the tingling becomes even stronger.
The tingling makes her aware of her own irresistible need for him.
（A-Alexis-sama... this is...）
Her heart tightened.
Fransisca reached out her hand without being instructed to do so, and traced Alexis's penis with her slender fingers.
At this time, Alexis let out a breath.
He feels a warm, slippery thing was crawling over his rod. And it was the lovely tongue of a Princess-maiden who is renowned as a beautiful princess.
Normally, the tip of the tongue would create a pure chant, but now it is crawling around on a deformity that is even uglier than an ordinary person, so you don't understand the world.
Watching Fransisca who was licking her tongue carefully with a mellow expression, Alexis couldn't stand it any longer.
「Fransisca, look up」
Alexis' hand is placed on Fransisca's head.
「Eh...?」
While Fransisca was puzzled, Alexis grabbed her chin and lifted it up, then instructed her to open her mouth and stick out her tongue.
Fransisca did as she asked, and Alexis poured saliva into her mouth from a high place.
「Ah, hyaa?!」
After pouring a lot of saliva into Fransisca's mouth, Alexis instructed her to "drink it".
「Ah, hyai...」
Fransisca, with tears in her eyes, swallowed hard.
And this before there was even a kiss.
For Fransisca, this brings about the realization that she is a slave, and for Alexis, it brings about a strong sense of conquest.
「Let me see if you've had enough to drink」
「Y-yes...」
Fransisca obediently opens her mouth. As she does so, Alexis sticks his finger in her mouth and stirs it in vain, "Good, good".
「Good job」
Fransisca looks relieved.
Her eyes widen in anticipation as the object leans against her neck. But—
「As a reward, I will give you this」
Alexis shoved his cock into her mouth, which had been left hanging open.
「Mngh――ggh!」
Fransisca's eyes were teary once again as she felt the penetration in a different place than she had expected.
「Huh, hit hwurt, hit hrong...」
It sounds like she is protesting something, but Alexis doesn't know what she is saying.
「Huh, am I making a mistake?」
Alexis asked, and Fransisca nodded her head with a tentacle in her cheek.
Alexis then pulls out his tentacle easily, but of course he has no intention to let it go.
「Well, you'll have to tell me where you want it, won't you? Otherwise, I can't give you a reward」
Alexis says smilingly.
「Fweh—」
Fransisca exclaims.
It was a tremendously high hurdle for a virgin who had just opened her bud.
< Prev - ToC -  Next >
Edited Kanaa-senpai
Please give a rating on the novelupdates -> here
Thanks for reading...