-->
Home Avalon Dungeon r18 Chapter 112 [Personal Guard] Torture with a Tentacle until the Heart Breaks, Part One
For starters, Alexis used his tentacle to crawl around Eden's breast.
Eden just bit her lip and turned her face away from him, not even twitching.
Eden's breast felt warm and soft through his penis. Even though she is a female knight with such a firm body, her breasts seem to be firm and soft.
Valencia, who is also a knight, also has a firm body, but Valencia's body is softer and her skin is more elastic. Probably, if Eden and Valencia were to fight, Eden would win at least in terms of power.
（—Well, otherwise, she should not call herself Krangal's personal guard, should she?）
This is different from the Sagrado knights in the priesthood. A Krangal knight would have to be stronger.
Thinking of this, Alexis feels somewhat proud, even though his opponent has endured so much. She is only a Krangal after all.
But even so, if the other person doesn't feel it, Alexis can hardly get into it.
Also, whenever Eden moves her hands and feet, he hears the sound of metal clanking. —Although she is supposed to, he does not even hear such background music because he does not even move his body.
For a while, Alexis stroked her breast with his penis as if crawling like a worm, but Eden did not move at all.
No, her breasts were indeed soft and fluffy against his penis. But that's not enough stimulation.
（...I have no choice. Let's go this way...）
Alexis decides to give up on the breast, and lets the tentacle go down. With a twitch, Eden's thighs move slightly. 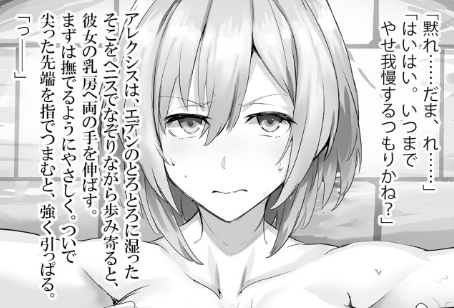